The following assumptions are being made

Creating the New CSA MC
The first step is to install the exact same version of CSA MC application on the new server. The license does not need to be installed on the new CSA MC because the license will be moved over from the old CSA MC as part of the database move.

Note: It is important to note that doing this fully replaces the existing database. This means that any SSL certificate, Agent, policy, group,etc information on the existing database will be removed. We will see how this affects the Agent registration for the new CSA MC later.

First, on the new and old CSA MCs, stop the CSA MC service and the Agent, running on the CSA MC, using the following commands

Open Start->Run… and type “services.msc”. Stop the Management Console, MSSQL, and Agent services. The services should look similar to the names below.

Note: The database changes are based on my own research. Use at your own risk

The CSA MC installation did not include the Management console to view the SQL Server 2005 database. Microsoft offers the Microsoft SQL Server Management Studio Express to manage the database. Download this application to the CSA MC and install it. After it has been installed, launch it. Take the default login settings as shown below 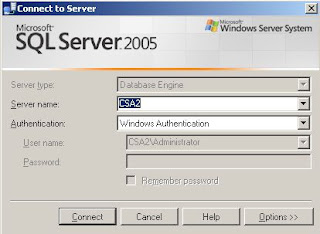 Navigate down the database tree to the following section 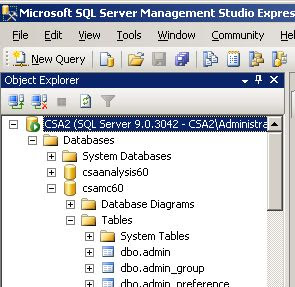 Within this tree scroll down and look for “dbo.mc_config”. Right click on the name and click “Open Table” as shown below 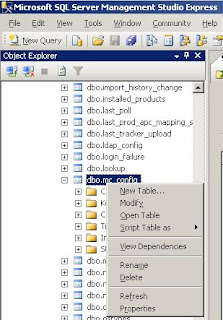 The table shows the entries that get sent as part of the Agent Kit. We will modify the parameters to reflect the new CSA MC instead of the old CSA MC.

This screenshot shows the database before any changes were made. The name CSA references the old CSA MC as does the IP 192.168.137.100 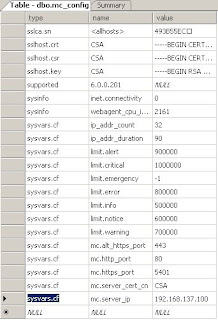 This screenshot shows the database after the changes were made. The name CSA2 references the new CSA MC as does the IP 192.168.137.15. 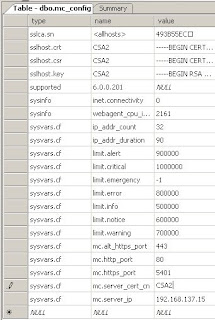 In addition to the changes listed above, you should probably modify the sslca.crt, sslca.ns, sslca.key, sslhost.crt, sslhost.csr, and sslhost.key files in the database. In my testing, everything seemed to work fine without modifying the values, but for completeness sake, I would recommend modifying both the names and the data to reflect the information on the new CSA MC server. The data can be retrieved from the c:Program FilesciscoCSAMCCSAMC60cfg directory. Right click on each file and open with notepad. Then copy the entire contents and paste it into the value portion of the database.

After the database has been changed, the agent kits need to be refreshed to incorporate the new values. This can be done by running the following command

Once this is complete, the agent kits will have the correct information referencing the new CSA MC.

Fixing the Agent on the New CSA MC
Now, access the web GUI and navigate to Systems > Hosts. You’ll notice that the new CSA MC server is not listed. This is because we are using the database from the old server. This is shown below. 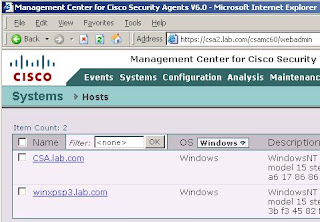 The old CSA MC does not need to be listed here, so you can move the server named “CSA.lab.com” to the recycling bin.

We need to get a new registration that is recognized by the current database on the new CSA MC. In order to do this, the following steps should be followed:

Following these steps will allow the Agent, running on the new CSA MC, to be properly registered and displayed.

Handling Existing Agents
The registration IDs for the existing Agents have been ported to the new CSA MC with the database move. There are just two steps that need to occur, on the computers with the Agent installed, to complete the migration of the already deployed Agents from the old CSA MC to the new CSA MC

To complete step 1, you will first need to stop the Agent with the “net stop csagent” command. After that, open the agent.bundle file and make the modifications as shown in the screenshots below. In the screenshots, CSA and 192.168.137.100 reference the old CSA MC and CSA2 and 192.168.137.15 reference the new CSA MC. The original file is shown on the left and the new file is shown on the right 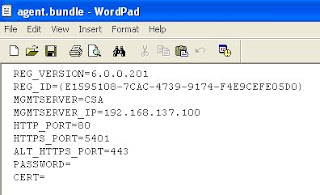 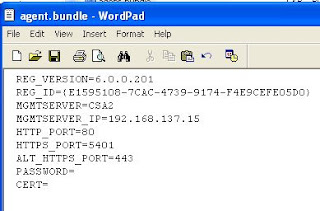 The two steps above can normally be accomplished with a central application used to push out applications. Some examples of these applications would be Microsoft SMS or Altiris.

Once the two step above are completed, you should see the following screen on the Agent status page 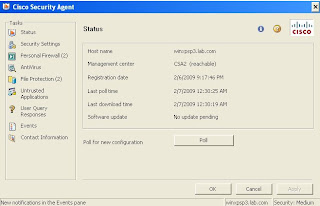